Eleven years ago I went to the best gig I’ve ever seen. Harry Connick Jr at the Royal Albert Hall in London. Truth to tell, my expectations were fairly low. The CDs that Harry had out at that time were fairly middle of the road, and I remembered the sheer excitement of his first Albert Hall big band gigs in the early 90s with too much love to think that this poor latter day version of a once-great artist could come anywhere near that fire power.

How wrong I was.

He performed a lot of material from those CDs I didn’t much care for, but he taught me, and everyone else in the packed auditorium, one helluva lesson. CDs are for selling; ‘live’ gigs are for living. The music was re-arranged, re-imagined, re-invigorated and re-al. Full on, difficult, not for the pleasing but for the love of it jazz. Well I was pleased. I was in love. 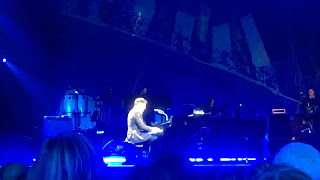 And - and this was cherry on the cake stuff - it was like jazz in the movies. Jazz in the movies is blue. The light, the set, the atmosphere. Harry’s staging that night was stunning. It was blue. And perfect. And when a soloist stood to soar, they were hit by a cartoon-perfect spotlight, that threw the rest of the stage into blackness and the soloist into diamond-bright glory. I’ve never seen anything like it before or since. It was intense. It was glorious. It was just the best.

Well, I came home dancing, and I put myself on a couple of email lists so that next time Harry came to town I’d be sure to get a good seat and re-live this amazing experience.

Week after week those email sites would send me news of other concerts that I had no intention of going anywhere near. As months passed into years, and still there was no sign of a return gig, there were times I thought of pressing unsubscribe. In what felt like increasingly vain hope, I resisted. Then, suddenly, last July, ten and a half years after that dim and distant memory of the best gig I ever went to, they turned up with the goods and my MacBook shouted at me.

Harry is coming back.

So I booked my ticket and instantly started to worry. Because, you know, lightning never strikes in the same place twice, right? There was no way that this gig was going to be anywhere near as good as 2007, right? And all I had from that gig was my memory, and a sense of how superb it was… This time was going to be one long let-down.

So I arrived early at the London Palladium. I admired the photos of Harry adorning the outside of the theatre, with him flashing his wedding ring very prominently. “His wife chose that picture,” said one sad middle-aged female fan to her equally disappointed middle-aged female friend.

Inside, the bars were doing brisk trade. There were a number of folk who looked like people I ought to be recognising. I made my way in. A good seat, near the front, with the risk of being a terrible seat if really tall person sat in front of me. No-one sat there for an age till just before show time, a family came and sat down - a blonde woman and what I presumed were her daughters. Perfect - I had a great view of the whole stage.

Let’s get the negatives out of the way first. The sound balance wasn’t ideal - it varied, and at times was very heavy on the rhythm, and so light on the (small) horn section that it felt more like a rock gig than a jazz gig. It varied through the evening; a friend of mine did find this a disappointment. I confess, I struggled less - because my attention was less on the band and much more on Harry, who looked and sounded great.

And that’s it for the negatives. Everything else was pure joy. I’m the same age as Harry (go on, I’ll admit to a couple more months) and I’d heard a couple of TV performances in the last year that had made me wonder if he was going to sustain a whole evening’s show.

What utter tosh. Harry Connick Jr was in stunning form. His voice has never been a thing of immaculate beauty, like that Canadian guy, but it is the grit and the character that makes it so terrific. His piano playing was relaxed and flowing, and a thing of power and imagination. His presentation was playful, having fun with a guy wearing an outrageous jacket, talking to folk who wandered out to the toilets or bar, interrupting himself frequently with asides and embracing the crowd in a way I just don’t recall from eleven years ago.

There were times when he looked straight at me, and I was completely taken aback. He even winked, which was both disconcerting and sneakily wonderful. Then he introduced his wife Jill - the blonde woman in the seat in front of me… A relief, and a disappointment…Sitting where I was, I got to see how often he looked her way, and how much she enjoyed a show she must have seen many times. That was immensely touching. As was his interplay with his daughters, and their tourist tales of London.

Good to see guys in the band who’d been there with him back in 1991 (notably Lucien Barbarin), great to enjoy the variety of New Orleans stompers, When Harry Met Sally swingers, and some rather more funky stuff too. Plus - Harry sang Gospel. Not a thing I’d ever imagined happening. Jonathan duBose came on stage with his guitar, and we had a very powerful rendition of How Great Thou Art, plus a brief (but very inspiring!) sermon before a New Orleans funeral procession to When the Saints. And it didn’t stop there… we were treated to Harry’s trumpet playing, and to his tap dancing, along side pro Luke Hawkins. 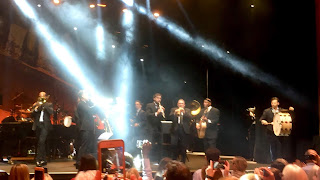 How did it compare with 2007? Ah, I think that was a very special evening. I think the band back then perhaps was better (a little bigger too - which made a difference on some of the charts).  I think the surprise factor played into it too. But…

There can’t be many performers who will do two and a quarter hours of a show without any intervals. No wonder the crowd bayed for more, and received encore after encore. And as Harry gets older, I honestly think he gets better. His voice, his musicianship, his showmanship, he looks great, and with such high expectations and such a long wait -

He did not disappoint.


Come back soon. Please. With a full big band. Or just you & a piano. But come back soon.
Posted by Marcus Green at 7:02 pm