We began our preparation on Sunday with a trek through 2 Kings 2.1-12, and deepened that journey in our Wednesday Bible Study yesterday. It was such a great journey I thought I'd mark it here.

Elijah is about to be taken up to heaven; he is preparing Elisha finally to assume his mantle (literally) as the Lord had first instructed would happen in 1 Kings 19. And in order to make sure he is ready, they embark on a spiritual journey.

It begins at Gilgal. Gilgal? Joshua 5 is the reference. The people have wandered in the wilderness for forty years and finally crossed the Jordan. None of the men who have been born in those wanderings have been circumcised, and Joshua puts this right as they enter the promised land at Gibeath Haaraloth (Hill of Foreskins - I'm guessing the estate agents worked on changing that name). Then the Lord said to Joshua (verse 9): "Today I have rolled away the reproach of Egypt from you." So the place was called Gilgal - which sounds like the Hebrew for rolled away.

We all have a past, and voices whispering from it, that bring accusations and reproach. We all need a Gilgal, and a journey there to remind us that the Lord has wiped away that reproach. As Elijah prepares Elisha for a life of service with one final day's worth of reminders, he begins with a place that says that God wipes the slate clean. You'll need to remember this. To start here time and time again. But this place exists. Treasure it.

They go to Bethel. (I'm going - you stay here says Elijah, to see if his protege has the will power to last the course; but Elisha wants the full measure of what his master will show him, he wants to miss nothing, and he refuses to stay behind.) Bethel? 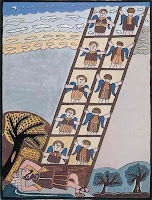 Genesis 28. Jacob has stolen the blessing from Esau. Esau is furious, and Jacob decides to run for it; Rebekah, his mother, tells him to run to family in Haran (way East - Iraq?) & passes it off with father Isaac as a wife getting trip. Jacob runs. At the end of the first day he falls asleep and has a dream - a dream of angels and ladders and God telling him that it's OK if he runs, but he has made a promise & will keep that promise. He will give the land where he is lying to his descendants, like and on the shore, like stars in the sky, and however far Jacob runs, God will stay with him and wait & keep his promise.

Jacob wakes up and says - this is the gate of heaven, the house of God. Beth (house) El (God). Bethel.

Ever run away from anything? Ever been afraid? Then you need to know God's promises and a place where they are made and where they come true. He is with you always. Always. And he will never let you go. Elijah once ran; but God did not abandon him; he passes this on to Elisha for he knows that in life, everyone who would serve needs this one. God keeps his promises, no matter where we run. He is with us. Bethel.

They go to Jericho. Jericho! Walls, trumpets, Joshua fit de battle. But first, before the battle: in Joshua 5.13-16, Joshua sees a man before him with a drawn sword, and he askes him, Are you on our side or theirs? The man replies: Neither. Strange way of putting things. I'm not on your side; you're on mine - I'm commander of this army, you know. Joshua worships him, calls himself his Lord's servant, and in his equivalent of the burning bush moment is told to take off his sandals for he is on holy ground.

We often want God to jump at our command, to sing our tune. But he is God and we are the servants. He isn't on our side. We are on his. That's some difference. If we would serve him truthfully and powerfully and really see victory, we need to learn that. Elijah takes Elisha to Jericho to spell it out. He has had his own victories; they were won when he he raised the cry, Who is on the Lord's side?

They go on to the Jordan. (Elijah: I'm going alone. Elisha: Not blooming likely!) Where the people of God entered the promised land. But the language isn't about that... on that occasion, though they crossed the river, the way it is described bears no resemblance to the way Elijah and Elisha cross. Here, the water parts and

forms a wall to the right and the left, and though physically they stand at the Jordan, in fact they are taken to Exodus 14.21-22, to the Red Sea, to Moses, to a place where there is an Egyptian army behind them and an impassable ocean before them - but God provides a way.

An army behind, a sea before; how often do we face defeat at the hands of life? We need a deliverer, a rescuer, a redeemer. And we have one. Elijah shows Elisha that there will be days when it is impossible to carry on; but God will provide a way. 2 Kings 6 sees Elisha surrounded by the army of Aram - and having learnt the lesson of the Jordan on this day.

Elisha walks with his master, takes in the places and their lessons. We too have a past and places and lessons to remember. And Elijahs to learn from - people who have gone before us and passed on their faith to us. Elisha asks for a "double portion" of Elijah's spirit, not asking to be twice the man Elijah has been, not being greedy or overreaching, but following Deuteronomy 21.17, asking to inherit the first born's right - the full inheritance. From whom have we inherited such a double portion? Whose faith has birthed and blessed and taught and nurtured our own?

But Lent is not simply a time to look back and be thankful. We look forwards. We grow on in our lives with Jesus, ever aiming at the cross and resurrection and the life of the Spirit that they guarantee. And standing with Elijah on a mountain top, Peter, James & John saw the greatest prophet of Isreal fade and the Father's voice remind them: "This is my Son; listen to him." And the Son never fades. Elijah was taken from Elisha, those who have blessed us on our journey vanish from our sight, but the Son remains, and his hand holds ours for ever.

If we would serve him, we would do well to learn the lessons of Elijah and Elisha's journey; Gilgal - reproach rolled away, Bethel - promises made & kept by the always with us God, Jericho - we are on the Lord's side and not the other way (which truth brings victory), Jordan - facing defeat we find a deliverer who will rescue us and provide a way out. But we take those steps holding Jesus' hand, which will never let us go.
Posted by Marcus Green at 9:49 pm

Brilliant Marcus - was this the outline of Bible Study last Wednesday? If so I missed a treat. Don't you have the recording of Kenn Hughes with Joshua fit de battle? That was supercool.

WOW Marcus what a journey. Thankyou so much for sharing this with us

This is brilliant teaching Marcus. It will not be forgotten, it will be apart of our daily prayers, THANYOU. Joyce